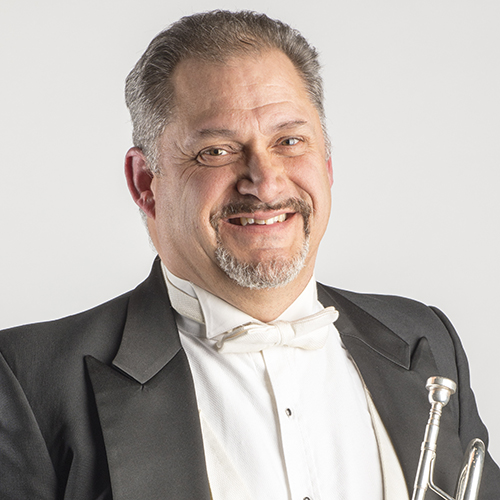 Eric Knorr is a native of Wooster, OH, and became the Orchestra Librarian in August 2016.

Like his predecessor, William Slusser, Eric is retired from active military service after a 20-year career.

Eric is a graduate of the College of Wooster, earning a Bachelor of Music in 1989. Graduate work followed; he received a Master of Music from the University of Akron in 1991 and completed all of his Doctor of Musical Arts course work at the University of Cincinnati College-Conservatory of Music (CCM) in 1994. He entered Active Duty in the Air Force and is the retired Principal Trumpet of the Air Force Band of Flight at Wright-Patterson Air Force Base. Before that he was Principal Trumpet of Heartland of America Band at Offutt Air Force Base, Nebraska.

As an orchestral musician, Eric has been a substitute player of every position within the DPO trumpet section. He is Principal Trumpet of the Bach Society and is a regular substitute with the Cincinnati Symphony Orchestra and Cincinnati Pops. Eric’s other professional orchestral credits include the Cleveland Pops, Omaha Symphony, Akron Symphony, Cincinnati Ballet Orchestra, Ohio Light Opera Orchestra and several other orchestras in south and west central Ohio.

As a chamber artist, Eric is a founding member of the Oakwood Brass. The ensemble is in residence at Westminster Presbyterian Church and has twice been the featured artists on Bach Society’s subscription series.

Eric is an Artist-in-Residence in Trumpet at the University of Dayton. He recently presented Master Classes at Wright State and Bowling Green State Universities and Miami University (Oxford).

Eric and his wife, Michelle, have four children. His eldest daughter, Hannah, is a graduate of the Dayton Ballet School Program and is now a ballet major at the University of Oklahoma.