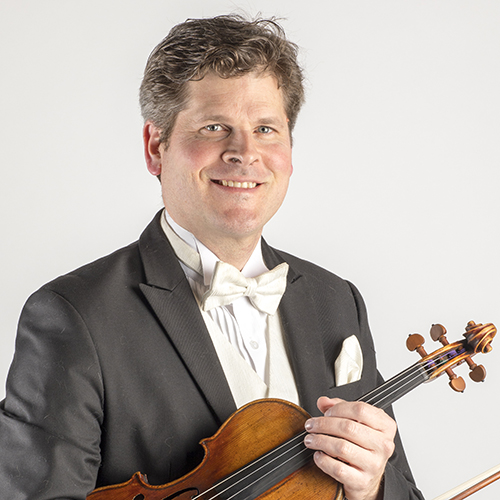 William Manley has been a member of the DPO since 2005 and its Assistant Concertmaster since 2009.

He began violin lessons at the age of eight and attended the Interlochen Arts Academy for all of his high school years. In 1990, Will entered the Manhattan School of Music in New York City, where he earned a Bachelor of Musical Arts degree, studying under Albert Markov, Oleh Krysa, Sylvia Rosenberg, and Ariana Bronne.

He earned a master’s degree in 1998 from the Indiana University School of Music, where he was a student of Nelli Shkolnikova. After graduation, Will moved to Hong Kong for three years, where he was a member of the Hong Kong Sinfonietta and the City Chamber Orchestra of Hong Kong.

He also taught extensively and while there met his wife, Eillane, who hails from the Philippines. Will returned to the U.S. in 2003 and was a member of the Arkansas Symphony for two years prior to joining the DPO.

He is also a member of the ProMusica Chamber Orchestra of Columbus and is an associate musician with the Columbus Symphony Orchestra.