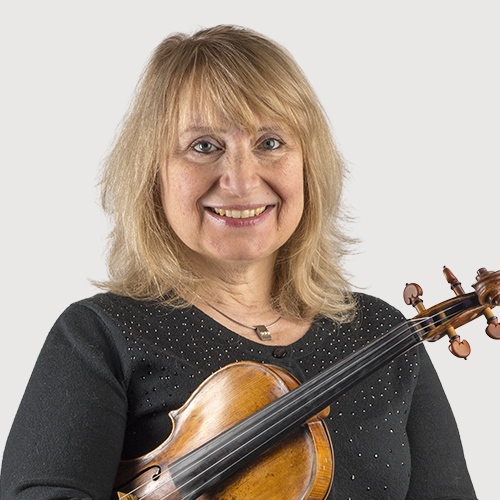 Dona Nouné is one of the Dayton Philharmonic Orchestra’s international musicians. She was born and raised in Beirut, Lebanon, and has lived in England, Canada, and Germany, where she started her musical career. Her father was Lebanese (a violinist, naturally) and her mother was American (a cellist).

Dona is fluent in Arabic, English and German, has a good grasp of French, and teaches all three at the Berlitz School in Cincinnati. She studied at USC (Los Angeles), Royal Academy of Music (London, England), Eastman School of Music (Bachelor of Music, 1987) and Northwestern University (Master of Music, 1989).

Dona has been a member of the DPO First Violin section since 2001, was a member of the Nurnberger Symphoniker, Germany (1989–1996), and has performed as a substitute with both the Rochester Philharmonic and Chamber Orchestra of Europe, the latter under director Claudio Abbado.

She taught music earlier in her career in both Germany and England, and she continues to teach music privately today. She loves cooking—not baking, which requires precision measurements, but cooking, which allows more freedom! She also enjoys reading, long walks, gym workouts and recently discovered the joy of ballroom dancing. Dona lives in Cincinnati with her three daughters, two of whom are twins.