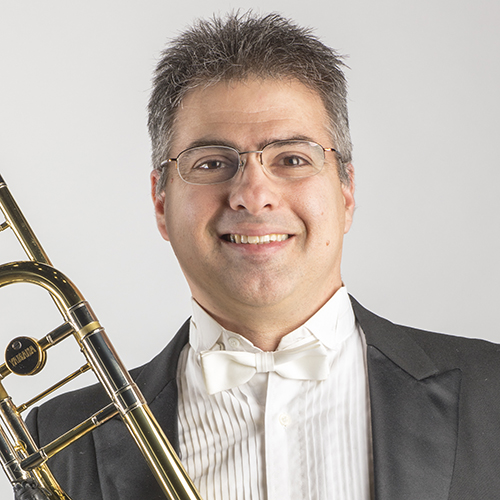 Richard Begel has been a member of the DPO’s Trombone section since 2003.

Rich began piano lessons at age 5 and began playing trombone in the fourth grade. He now manages and performs with the Greater Dayton Brass Ensemble and the Miami Valley Klezmer Ensemble. Both groups perform concerts, events, and a variety of educational programs.

Rich teaches at Sinclair Community College, Earlham College, Indiana University East, McCutcheon Music, Spring Valley Academy, Miami Valley School, his home studio, and he runs a summer brass camp. He has been a guest instructor at universities and music festivals in Ohio, Florida, Utah, Michigan, Alaska, Indiana, Colorado and Massachusetts. Rich is the author of A Modern Guide for Trombonists & Other Musicians and the editor of the first edition of Intonation Repair Tool.

He earned a Bachelor’s Degree in Music Education and Performance in 1993 from the Crane School of Music at the State University of New York (Potsdam) and a Master of Music Degree in 1995 from the New England Conservatory of Music.

Rich and his wife, Melissa, a librarian, have two wonderful children and several cats, fish, and reptiles.